Incigneri, B.J., The Gospel to the Romans – The Setting and Rhetoric of Mark's Gospel 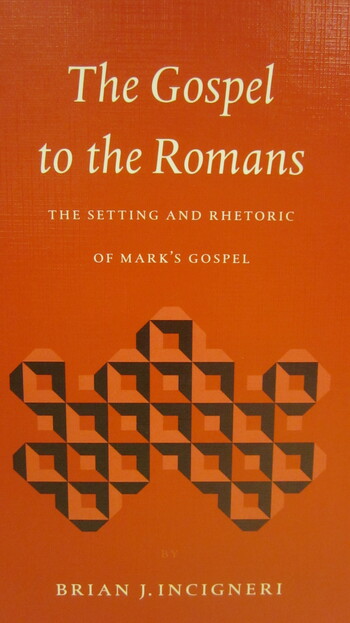 In this book Incigneri pursues a double purpose. He defends a post-70 CE origin of the first gospel (71 CE more precisely), and he proposes that it was written in Rome for a Roman audience. For the post-70 origin of the gospel of Mark, Incigneri of course mainly relies upon the 13th chapter of this text, the war chapter. He offers an interesting analysis of a number of its verses, and he concludes that Mark wouldn’t have been so obsessed with the doomed temple if it had still been standing when he wrote his gospel. Quite surprisingly verses 24-25 are not part of this analysis, although in my opinion they should play the principal role. Since an overt reference to the destruction of the Temple was way too dangerous in the Roman empire governed by the Flavians who had dealt a crushing defeat to the Jews recently, Mark used a veiled description, but the abhorrent reality is quite recognizable behind the veil: after the oppressing event (of the burning of the Temple) the sun is darkened and the moon does not give its light (because of the enormous cloud of smoke that covered Jerusalem and the surrounding area).

The main theme of The Gospel to the Romans is Incigneri’s defence of a Roman provenance of Mark. He presents many arguments, some of which are quite convincing, others rather far-fetched. Particularly convincing are the Roman elements in the most obviously fictional parts of Mark’s story, the trial against Jesus and Judas’s treason. By contrast, equating John and James with the Flavian princes Titus and Domitian for example is implausible. Altogether I had the impression that Incigneri tries to bury his readers under a pile of arguments, up to the point that they start losing their strength. In the end I had the impression that Rome had become more important than Galilee and Judea, the regions where the crucial events had taken place.

Aside from the date and the place, in my opinion Incigneri forgets an important element in the origin of this gospel: for what occasion has it been written? As Incigneri shows that substantial information on what had happened in Palestine in 70 CE arrived in Rome only in mid-71 CE (together with the Jewish captives and slaves), we could ask ourselves what occasion in the near future could have persuaded Mark to write his gospel. I believe this was the Passover of the next year (72 CE), as it is clear that the culminating events of Jesus’ life have been artificially concentrated around this festival, the Feast of Liberation. Now that the catastrophic outcome of the war had become fully clear, and with a great number of utterly anxious and desperate survivors of the war around him, Mark could focus on the next Passover to give new hope to his post-traumatic compatriots. Through the spectacular survival of his crucifixion, which could be explained as an unexpected small victory in times of utter defeat, Jesus became the long-awaited messiah, a sign of hope that they were not completely lost.

Throughout his book Incigneri makes a myriad of interesting observations, especially when he uncovers the relation between gospel verses and Old Testament texts (especially the book of Isaiah, the favorite of the Essenes). Unfortunately Josephus and the Dead Sea Scrolls do not receive the attention they deserve. For example, if Jesus is hungry, Incigneri could have mentioned the famine during the siege of Jerusalem instead of presenting a symbolic explanation.

In the first chapter Incigneri argues that the whole ‘tradition and oral history’ theory in biblical scholarship doesn’t have a solid base, and that Mark’s gospel is a unity that bears the stamp of his originality and rhetorical craftsmanship. This way Incigneri unconsciously creates a vacuum between 30 and 71 CE, to which I will return below. In chapter 4 he discusses the political situation of Flavian Rome, and he labels the gospel of Mark as a piece of counter-propaganda. I believe Incigneri is entirelycorrect with his Satan=Rome equation.

The last part of The Gospel to the Romans loses a great deal of its value because here Incigneri starts from a false premise. He extensively leans on Tacitus’s story of the great fire of Rome in 64 CE and Nero’s persecution of Christians in its aftermath. He unreservedly labels the Tacitus story as true, while this is a highly contested fragment that should be used with extreme caution (if not left aside altogether). That Incigneri doesn’t mention the dubious status of this fragment shows his tendentiousness in this matter. From this unstable foundation he develops a martyrdom ideology of early Christianity which is highly speculative and I would argue completely false. If the early Christians were anxious and depressed by recent persecution, it was not because of persecution in Rome since the fire (64-71 CE) but because they had scarcely survived the war between the Jews and the Romans (66-70 CE) and were now deportees in a hostile environment.

Incigneri brings together a great deal of intriguing chronological and circumstantial elements: there is no trace of tradition or oral history, this original writing is the post-war product of Mark’s genius, Mark addresses an audience that has suffered terribly recently, Mark’s gospel is a piece of anti-Flavian propaganda, Roman writers in that decade tampered with chronology, authors from that era disguised information not to provoke omnipotent rulers, the destruction of Jerusalem overshadows the second half of this gospel. Wouldn’t all these clever observations make more sense if Mark was describing the war and its overwhelming impact? I believe that Mark has antedated the war events by 40 years because distilling a kind of Jewish/Essene victory out of the war reality was much too dangerous in a Rome that had recently celebrated the Flavian triumph over the Jews. The future of the Jews in Rome, of those who lived in the city before the war as well as of the recently arrived captives and slaves, was extremely unsure in Flavian Rome. What if Vespasian and Titus had continued the war against the Jews on the home front? It was unthinkable that Mark could openly speak of the survival of the Galilean rebel leader Jesus son of Saphat as a major source of hope for the first Christians. Antedating the events and blaming the Jewish authorities for Jesus’ crucifixion instead of the Romans was Mark’s ingenious solution.

I believe that the chronological vacuum that Incigneri creates by rejecting the widespread ‘tradition and oral history’ theory can only be filled by placing the crucial events of this gospel where they belong: just before and during the war of the Jews against the Romans. This book sometimes reminded me of Bauckham’s Jesus and the Eyewitnesses that defended the eyewitness position of the gospel writers, which is also incompatible with tradition, oral history and gospel precursors.

Generally speaking, accounts of highly important, overwhelming events are written soon after they happened. That the first gospel had been written four decades after the facts is an inexplicable chronological anomaly. Josephus wrote his Jewish War in the same decade as Mark wrote his gospel. Although in a completely different way, I believe they described the same events. Incigneri states that it is his aim to rehumanize the gospel of Mark. I believe this cannot be accomplished until the original chronology of the events of the time is re-established.

Despite these critical notes, The Gospel to the Romans is a highly interesting book for anyone interested in the origins of Christianity. It is the well-written result of thorough – although sometimes rather doctrinal – research, with abundant footnotes and an impressive bibliography.