Jesus organizes a looting under the cover of darkness in Mark 1:32-34 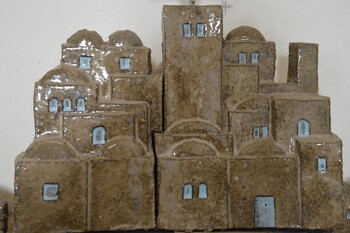 The story ‘Jesus healing the sick in the evening’ in Mark 1:32-34 (with parallels in Matthew 8:16-17 and Luke 4:40-41) at surface level recounts the miraculous healing of a multitude of sick people. Read against the background of the war against the Romans, however, this encoded story may describe a totally different reality.

The Nestle-Aland translation of these verses goes as follows:

(32) That evening, at sundown, they brought to him all who were sick or possessed with demons. (33) And the whole city was gathered together about the door. (34) and he healed many who were sick with various diseases, and cast out many demons; and he would not permit the demons to speak, because they knew him.

Before discussing these verses as a whole I want to address the phrase ‘possessed by demons’ at the end of verse 32. Elsewhere I have exposed the ‘premature addition’ type of interpolation that adds a word or phrase early on in the story which in its original layer appeared only later on. The purpose of this interpolation technique seems to be to deflect the story from its original meaning. For this fragment concretely it could mean that the those who were possessed with demons (δαμονιζομένους - daimonizomenous) are prematurely introduced in verse 32 while originally the demons (δαιμόνια – daimonia) were only present in verse 34. There is textual support for interpolation of this phrase as ‘possessed with demons’ is missing in a few manuscripts.

The reported event started at sunset. This is not the most straightforward moment for a session of mass healing, so we can question this compassionate purpose. In the article on the recruitment of Galilean revolutionary soldiers I argued that the Greek κακῶς ἔχοντας (kakōs echontas), which is consistently translated as ‘who were sick’ does not have to do with physical illness, and maybe this is also the case here. Κακῶς ἔχοντας is much more general, describing people in a deplorable state.

For the Galilean Jews of the lower classes the living conditions under Roman occupation had become intolerable. Together with Jewish refugees from the surrounding regions they were Jesus’ adherents, so maybe this fragment describes a meeting of the deplorables who were Jesus’ following. If so, then Jesus was the one who took the initiative for their gathering at that specific moment. That his following was brought to him may simply mean that Jesus had sent out messengers to announce and promote this meeting. The response to the call was huge, ‘the whole city’ arrived at the θύρα (thura). The Greek θύρα is consistently translated as ‘door’ (a Dutch translation even gives ‘door of the house’ while no house is mentioned) while θύρα is also the word for a gate. When a whole city population turns out, a meeting close to a gate seems more plausible than at the door of a private dwelling, but. The more that Genesis 32:10 reports a meeting near the city gate, and that on different occasions elsewhere in the Old Testament law is administered near the gate (Gen 19:1; 2 Sam 15:1-4; Job 29:7). A city gate therefore is a first possibility. As in an earlier blog post I discussed Jesus’ seizure of the Herodian palace in Tiberias, the gate of that palace compound may be a second option (see also Mark 2:2).
These new translation emphases in verses 32 and 33 change the picture from the unplanned arrival at sunset of a great multitude of ill people at the doorstep of Jesus’ private house to Jesus himself organizing a meeting of his following at a public meeting place.

For my translation choices in verse 34 I refer to the article on the recruitment of revolutionary soldiers. In my opinion verse 34 does not report on the healing of many people with physical health problems but on the care Jesus took of many destitute people with various sufferings. What could ‘taking care’ concretely mean in this situation? At the beginning of the war against the Romans an ethnic civil war was being fought in Palestine. Tiberias was filled with Galilean revolutionaries and Jewish refugees from the surrounding Syrian territories, all of them people in deep social and economic trouble. They were Jesus’ following as he and his Essene co-revolutionaries held the prospect of a free, just and prosperous Israel, which they called the kingdom of God (and not of the Romans anymore). We can wonder what the leader of this great multitude without livelihood could do for his following. He could organize a looting, as plenty of victims were available. Tiberias was a city with a mixed Syrian and Jewish population, and during the civil war both population groups were deadly opposed. That many Syrians in the city belonged to the wealthier part of the population was an interesting extra. Verse 34 also tells that the effect of Jesus’ care for his people is the expelling of the demons. In the blogs on ethnic murder in the synagogue of Tiberias and on the Tarichaean phase of the war I have identified the ‘evil spirits’ as Syrian inhabitants of Galilee, and here the word δαιμόνια (daimonia) seems to be used as a synonym.

At this phase of the civil war Jesus and his revolutionary ‘army of the poor’ had the upper hand in Tiberias. The Syrians who lost their properties and were driven out of their houses did not dare to protest as they knew Jesus’ reputation which made them fear for further maltreatment or worse.

This analysis provides strong situational evidence for the interpolation of those ‘possessed with demons’ in verse 32. The Syrian part of the inhabitants of Tiberias of course was not invited at the meeting of the Jews which Jesus organized, because the aim of the meeting was to go and chase them, not to warn them beforehand by inviting them to this meeting that was directed against them. In this context ‘the whole city was gathered’ can more specifically be understood as a gathering of the whole Jewish part of the city population, together with the many Jewish refugees staying at Tiberias.

In Life Josephus twice reports on plundering in Tiberias.
In verse 65 he recounts the intended demolition of the palace of Herodes Antipas: Capella and the other leaders for a long while refused this, but were finally overruled by us and assented. We were, however, anticipated in our task by Jesus son of Sapphias, the ringleader, as already stated, of the party of the sailors and destitute class. Joined by some Galileans he set the whole palace on fire, expecting, after seeing that the roof was partly of gold, to obtain from it large spoils. There was much looting, contrary to our intention.

Verses 333-335 give a more detailed account of a plundering. The core sentences go as follows (verses 333/334): They [the Tiberians] besought me [Josephus] at the same time to recover what still remained of the plunder for those who had lost their property. I accordingly ordered all the possessors to produce everything. As there was considerable delay in obeying these orders I, observing that one of my soldiers was wearing an unusually magnificent garment, asked him whence he obtained it.

Probably Mark 1:32-34 is describing the organization of one of these lootings. The booty which is not mentioned in Mark is given by Josephus: luxurious furniture and a large mass of uncoined silver (in Life verse 68) and exquisite clothes.

Mark forged the time setting of the events he described and dehistoricized them, making them as good as unrecognizable. However, when located in its original context, Mark 1:32-34 reveals an ethnic civil war event in Tiberias in the preamble of the war against the Romans.

Below I give the text with my translation choices underlined, information omitted by Mark in bold and decrypted terms upright. I left out the premature mention of those ‘possessed with demons’.

(32) That evening, at sundown, (they) his messengers brought to him all those in a deplorable situation. (33) And the whole Jewish part of the population of the city was gathered together near the gate. (34) and he took care of many who were in a bad state because of various sufferings by inciting them to plunder their Syrian fellow citizens, and expelled many Syrians; and he would not permit the Syrians to speak, because they knew him and his murderous reputation.