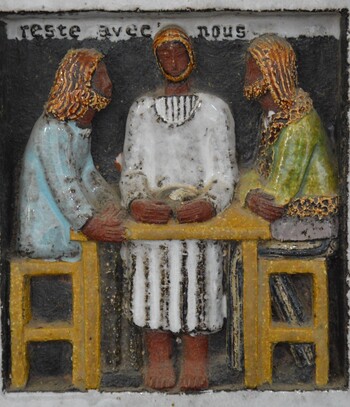 The Emmaus narrative is one of the most famous and telling gospel stories. On closer inspection, however, it is also a bizarre story, in the first place because of the location of the town of Emmaus. This city is located north-west of Jerusalem, in a region that is completely out of Jesus’ field of action. Jesus was active in his home region Galilee and its adjacent territories, in the Judaean capital Jerusalem and in the northern and eastern part of Judea (Ephraim, Bethany, Jericho). Emmaus is not only a strange place to encounter Jesus himself. The presence of acquaintances of him in this unexpected location is equally strange.
The Emmaus story is present only in the gospel of Luke. This element could also raise distrust, but that does not have to be the case. One of the main characteristics of the gospel of Luke is that it partially rehistoricizes the gospel of Mark, and I believe this fragment is an excellent example of this rehistoricizing approach. Maybe Luke gives a view into a historical element of the then events that the other gospel writers have eliminated.

In our attempt to get hold of this strange city of Emmaus, maybe we should take a look at the Greek spelling of Emmaus, about which some interesting observation can be made. The city on the road from Jerusalem to the western plains that is commonly identified with Luke’s Emmaus is mentioned several times in Josephus, in War as well as in Antiquities. In War it is consistently spelled as ʼΑμμαους, in Antiquities we find ʼΑμμαους and also Εμμαους*. Besides this Ammaus/Emmaus in Judea, Josephus also mentions the small town of ʼΑμμαθους in Galilee, in both War and in Antiquities. In Antiquities XVIII:36 ʼΑμμαους and ʼΑμαθους are variant readings for this Galilean village. Given that Jesus was a Galilean, it is interesting to take a closer look at this Galilean Ammathus/Ammaus.

The Galilean village of Ammathus (Hebrew Hammath) was a small Jewish settlement on the western shore of the Sea of Galilee, famous for its hot springs. It already existed for centuries when around 20 CE Herod Antipas had a new town built just north of it that he made his capital. He did not call this new city ‘New Ammathus’ but he dedicated it to the Roman emperor Tiberius and for that purpose named it Tiberias. The distance between Hammath and Tiberias is 2.5 km. As Jesus had no connection with the Judaean town of Ammaus/Emmaus, I believe Luke slightly changed the name of the Galilean village of Ammathus/Ammaus into Emmaus. This alteration served a double purpose: the Judaean Emmaus had an interesting connection with the heroic Maccabees and with the expected messiah, and the slightly changed city name also served as a sophisticated kind of camouflage, telling enough to the informed reading and at the same time obscuring things for the uniformed one.

One more point we should consider is the fact that the gospel of Luke is a Jerusalem-centered construction. I believe that this fragment is a good illustration of this Jerusalem bias. The Judaean capital is mentioned three times in this fragment, in verse 13, 18 and 33. If Luke were in fact talking about Hammath south of Tiberias, it would be strange that he mentions the long distance between Jerusalem and this Galilean village. When at first sight Jerusalem and nearby Judaean Emmaus seem to be connected, Luke seems to communicate the distance from Jerusalem to the nearby town that Jesus is heading for. But maybe it is the other way around. Maybe Luke gives the distance between Hammath and the nearby town Jesus is approaching. So I believe that in fact Luke does not talk about Jerusalem (capital of Judea) → Emmaus, but about Ammathus → Tiberias (capital of Galilee). Probably the original sequence was Tiberias (in verse 13)  – Jerusalem (v. 18) – Tiberias (v. 33).

In A Chronological Revision of the Origins of Christianity I have identified Jesus son of Saphat in Josephus with the Jesus of the gospels. Jesus was the leader of the Essenes of Tiberias in the period of the war against the Romans. Below I have reconstructed the Emmaus story against that background.

In September 67 CE Jesus and his followers fled to Jerusalem at the capture of Tarichaeae, after they had moved there from Tiberias. After a 3 years stay as a rebellion leader and refugee in Judea and after finally becoming a victim of the siege of Jerusalem, Jesus longed to return home (see Mk 14:28). After the survival of his execution he tried to escape to his beloved Galilee as quickly as possible, maybe in disguise. On approaching his home town Tiberias, near Hammath Jesus encounters two sad men who are discussing the horrible recent events that had befallen their country and Jerusalem, the core of their nation. They do not recognize Jesus, which may be surprising at first sight, but which is comprehensible as follows. Jesus has been displaced for 3 years, and his countenance had severely aged from starvation. Maybe Jesus had also disguised himself (for an example of disguise from that era see Josephus, Life 47). Jesus feigns not to know what has happened, maybe because he is cautious and wants to assess the situation first. When the men tell him what happened, Jesus replies with quotes from the Scriptures. As an Essene priest he knew the Scriptures well, and his journey home had taken enough time to correlate the recent catastrophic events with relevant passages from the Tanakh. Maybe he quoted from Isaiah, the favorite book of the Essenes: “For I have heard a decree of destruction from the Lord God of hosts upon the whole land.” (28:22) When the men give a sign of hospitality by asking him for dinner, he accepts. Jesus is recovering from starvation, so the offered meal is welcome. At the start of the meal Jesus plays his role as an Essene priest and blesses the bread. From that gesture the two recognize him, despite his appearance and/or disguise. After the meal Jesus starts the last small stage of his journey home, and the two men hurry to their relatives and friends to tell the spectacular news that Jesus has survived the hell of Jerusalem and has returned home again.

* Maybe the Emmaus spelling in Antiquities is deliberately introduced by a Christian copyist who desired to attune Josephus with Luke. This attuning seems to be at work also in the Loeb edition of Antiquities. Ten times ʼΑμμαους is translated as Emmaus!