Vespasian, the supreme ruler in the parable of the ten pounds (Luke 19:12-27) 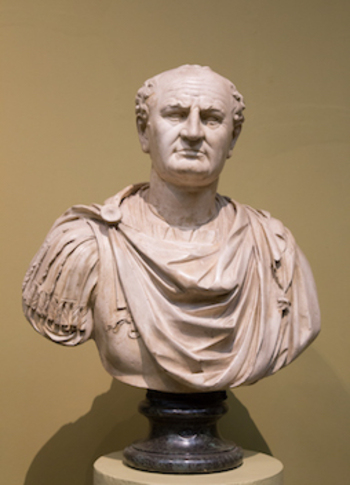 My research into the origins of Christianity shows that the Gospels are much more political in nature and have much more to do with the war against the Romans than is generally accepted. I believe this is also the case with the parable of the ten pounds in Luke 19:12-27, of which in my opinion the Roman emperor Vespasian is the protagonist. Below I reproduce and comment on the story verse by verse or in little clusters of verses.

A nobleman went into a far country to receive the kingdom and then return.

Vespasian, a Roman nobleman, member of the equestrian order, was proclaimed emperor by his legions when he was in the East. He returned to Rome to claim the emperorship and to chase Vitellius.

(Note: The Greek ‘basileia’ is translated as ‘kingdom’, but it is a broad term meaning ‘supreme rule’ that covers emperorship and kingship.)

Calling his ten servants, he gave them ten pounds, and said to them, ‘Trade with these till I come back.’

Comment: The Roman empire consisted of 10 provinces: Italy, Achaia, Asia, Syria, Egypt, Africa, Spain, Gallia, Britannia and Germania. When Vespasian came to power, the finances of the empire were in ruins, so he searched for money wherever he could to improve the financial situation of the treasury.

But his citizens hated him and sent an embassy after him, saying, ‘We do not want this man to reign over us.’

Comment: In the ongoing civil war in Rome the different factions hated each other. Of course hostile groups did not want Vespasian to become emperor.

When he returned, having received the kingdom, he commanded these servants, to whom he had given the money, to be called to him, that he might know what they had gained by trading.

Comment: Vespasian decreed the taxes of the provinces be raised. Afterwards he called the governors to account.

(16) The first came before him, saying, ‘Lord, your pound has made ten pounds more.’ (17) And he said to him, ‘Well done, good servant! Because you have been faithful in a very little, you shall have authority over ten cities.’ (18) And the second came, saying, ‘Lord, your pound has made five pounds.’ (19) And he said to him, ‘And you are to be over five cities.’

Comment: The meaning of the ten cities is not clear to me. But Suetonius mentions five communities (cities and city-states) from which Vespasian took away their liberties: Achaia, Lycia, Rhodes, Byzantium and Samos.

(20) Then another came, saying, ‘Lord, here is your pound, which I kept away in a napkin; (21) for I was afraid of you, because you are a severe man; you take up what you did not lay down, and reap what you did not sow.’

Comment: The bad pupil is the Jewish nation. That the Jewish rebels saw the Romans as reapers who harvested what they did not sow is obvious.

(22) He said to him, ‘I will condemn you out of your own mouth, you wicked servant! You knew that I was a severe man, taking up what I did not lay down and reaping what I did not sow? (23) Why then did you not put my money into the bank, and at my coming I should have collected it with interest? (24) And he said to those who stood by, ‘Take the pound from him, and give it to him who has the ten pounds. (25) - (26) I tell you, that to every one who has will be given; but for him who has not, even what he has will be taken away.’

Comment: During the rebellion the Jews did not pay taxes, so financially the rebellion (together with the war efforts) were detrimental to Rome. At the end of the war the enormous wealth of Jerusalem has been taken away to Rome. A heavy capital tax (tributum capitis) was installed; after the war the Jewish farmer paid four times more taxes than his Egyptian counterpart.

(27) And as for these enemies of mine, who did not want me to reign over them, bring them here and slay them before me.

Comment: Simon bar Giora, the captured rebel leader, was brought to Rome and executed in front of Vespasian at the end of the triumphal march celebrating the victory of the Flavians over the Jews in 71 CE (Josephus, The Jewish War VII, 153-154).

In my opinion this fragment of Luke discusses the Roman emperor Vespasian, his coming to power, his financial policy, his relation to the Jews and finally the execution of his major military opponent during the war, the chief Jewish rebel leader Simon bar Giora, the year after the fall of Jerusalem. The Gospel writer seems to be well informed on the political situation of his days.

I did not encounter this interpretation of the parable of the ten pounds in the literature, so, as I did not read everything on the subject, I wonder if my interpretation is new or just a repetition of an existing one. In the latter case, I will be happy to receive references to existing material.