Signs in the sun and the moon, the stars and the sky; unexpected light and darkness – Part one: the texts 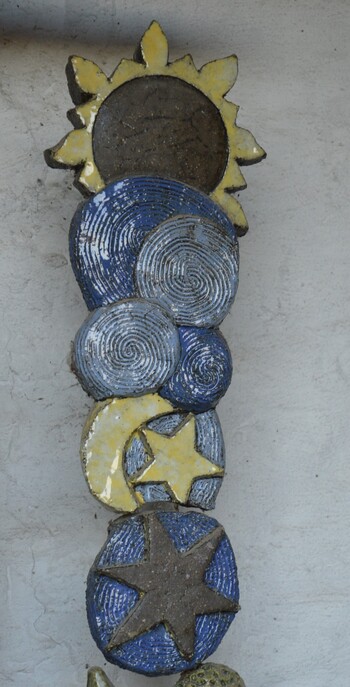 In this blog post I discuss several New Testament and other early Christian texts which describe signs in sun, moon, stars and sky (‘heavens’) and unnatural changes in light and darkness. Part one offers an overview of the fragments referred to. In part two, I examine more closely the ‘signs’ in these fragments and identify key elements for each of three categories: accompanying phenomena, messianic indicators and political/chronological indicators. Footnotes provide additional information. This is then followed by a general discussion of the subject in part three.

1. The phenomena accompanying the death of Jesus in the passion narrative of the synoptic gospels

Gospel of Mark chapter 15: (33) And when the sixth hour had come, there was darkness over the whole land until the ninth hour. … (38) And the curtain of the temple was torn in two, from top to bottom.

Gospel of Luke chapter 23: (44) It was now about the sixth hour, and there was darkness over the whole land until the ninth hour, (45) while the sun’s light failed; and the curtain of the temple was torn in two.

Gospel of Matthew chapter 27: (45) Now from the sixth hour there was darkness over all the land until the ninth hour. … (51) And behold, the curtain of the temple was torn in two, from top to bottom; and the earth shook, and the rocks were split; (52) the memorials also were opened, and many bodies of the saints who had fallen asleep were raised.

2. The ‘signs’ of the Synoptic Apocalypse

Gospel of Mark chapter 13: (24) But in those days, after that catastrophe, the sun will be darkened, and the moon will not give its light, (25) and the stars will be falling from heaven, and the powers of the heavens will be shaken. (26) And then they will see the Son of man coming in clouds with great power and glory.

Gospel of Luke chapter 21: (25) And there will be signs in sun and moon and stars, and upon the earth distress of nations in perplexity at the roaring of the sea and the waves, (26) men fainting with fear and with foreboding of what is coming on the world; for the powers of the heavens will be shaken. (27) And then they will see the Son of man coming in a cloud with power and great glory.

Gospel of Matthew chapter 24: (29) Immediately after the catastrophe of those days the sun will be darkened, and the moon will not give its light, and the stars will fall from heaven, and the powers of the heavens will be shaken; (30) then will appear the sing of the Son of man in the sky, and all the tribes of the earth will mourn, and they will see the Son of man coming on the clouds of heaven with power and great glory.

6:12-15:
(12) There was a great earthquake; and the sun became black as sackcloth, and the full moon became like blood, (13) and the stars of the sky fell unto the earth as the fig tree sheds its winter fruit when shaken by a gale; (14) the sky vanished like a scroll that is rolled up, and every mountain and island was removed from its place. (15) Then the kings of the earth and the great men and the generals and the rich and the strong, and every one, slave and free, hid in the hide-outs and among the rocks of the mountains.

XVI:6 and 8:
(6) And then shall appear the signs of the truth. First the sign spread out in the sky, then the sign of the trumpet, and thirdly the resurrection of the dead. (…) (8) Then shall the world see the Lord coming on the clouds of heaven.

Verse 35-36:
(35) And in the night in which the day of the Lord was dawning, as the soldiers kept guard two by two in a watch, a great noise arose in the sky, (36) and they saw the heavens opened, and two men come down from there with great light and approach the tomb.

I will tell you a very clear sign, so that you may know
when the end of all things comes to pass on earth:
when swords are seen at night in starry heaven
toward evening and toward dawn,
right away a cloud of dust is brought forth from heaven
to the whole earth, and the beams of the sun
disappear from heaven in mid-course, and the rays
of the moon appear and come again on earth.
There will be a sign from the rocks with drops of blood.
You will see a battle of infantry and cavalry in the clouds,
like a hunt of wild beasts, like a mist.
This is the end of the war which God, who inhabits heaven, is accomplishing.
But all must sacrifice to the great king.


8:202-208
The year as a whole is an era turned upside down.
The sun, seeing dimly, shines at night.
Stars will leave the vault of heaven. A raging storm with many a hurricane
will lay the earth desolate. There will be a resurrection of the dead
and most swift racing of the lame, and the deaf will hear
and blind will see, those who cannot speak will speak,
and life and wealth will be common to all.

The veil of the Temple will be rent,
there will be dark monstrous night for three hours.

7. The fourth book of Ezra

5:1-5:
Now about the signs: Behold, the days are coming when those who inhabit the earth shall be seized with great terror, and the way of truth shall be hidden, and the region shall be barren of faith. And lawlessness shall be increased beyond what you see yourself, and beyond what you heard of formerly. And the land which you now see ruling shall be in chaos and men will see it untrodden. But if the Most High grants you survival, you shall see that after the third upsetting (day), unexpectedly the sun shall shine during the night, and the moon during the day. Blood shall drip from wood, and the stone shall utter its voice. Peoples shall be troubled, and the stars shall fall. And the one shall reign whom those who inhabit the earth do not hope for.

4:4-5
This ruler, with the appearance of that emperor, will come, and with him will come all those in power (of the army) of this world, and they will obey him in every wish. By his command he will cause the sun to rise at night, and the moon also he will make to appear at the sixth hour.