The apocalyptic XVIth chapter of the Didache – Part one 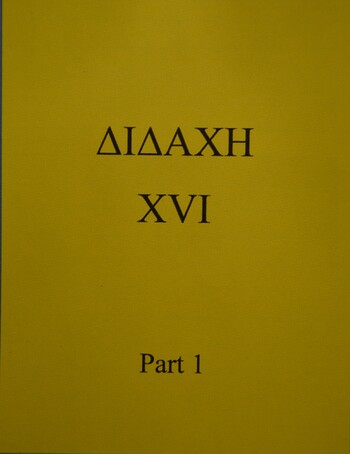 The Didache is broadly considered to be an independent and very early Christian writing, probably from the end of the first century CE. It shows some relationship with the gospel of Matthew and with Revelation, but it is not dependent on either of them. The last chapter of the Didache is written in the apocalyptic style, and here quite some similarities with the Synoptic Apocalypse can be discerned. Below I will discuss in detail the relation between Didache XVI, relevant New Testament fragments (primarily the Matthean version of the Synoptic Apocalypse1), and Josephus.

I do not consider apocalyptic writings to be discussing timeless other-worldly subjects. I believe they discussed historical themes, but these topics were too delicate, too subversive to discuss them openly in the harsh totalitarian environment of the Roman empire. Apocalyptic writing presupposed sound historical knowledge of its readers. When read with that historical knowledge in mind (and maybe with spoken assistance from the writer or someone of his circle) apocalyptic writings conveyed very precise historical information. Before 70 CE a major theme of these Jewish apocalyptic writings was the deep hostility between the Jews and the Romans and the future victory of the former over their Roman oppressor. The Dead Sea Scrolls contain a lot of these apocalyptic writings, with the Romans disguised as the Kittim. After 70 CE these texts primarily discussed the lost war against the Romans, including the destruction of the Temple and Jerusalem, and Jewish hope for imminent revenge through the final victory of their Christ and/or the destruction of Rome.

The independence of the Didache means that we encounter unique ideas or wording in this text, but below we will mostly concentrate on similarities with passages from Josephus and the New Testament. I will discuss Didache XVI verse by verse, following this sequence: a) quoting the verse, b) indicating the main theme of the verse, c) thematically comparing the Didache verse, Josephus and the New Testament (if applicable), and d) adding comments if necessary. As this discussion is quite elaborate, I will present it as a serial.

Be vigilant for your life; do not let your lamps be extinguished, nor your waist be ungirded. But be ready, for you do not know when our Lord is coming.

(Didache) ‘Be vigilant’ is the translation of the Greek γρηγορειτε (see next entry).

(Josephus) In the first phase of the siege fleeing was still possible, as the encircling of Jerusalem was not watertight.

(New Testament) Fleeing to the mountains from surrounded or besieged Jerusalem is a concrete way to be vigilant for one’s life.

The Lord comes in perilous times

The ‘be vigilant’ in Matthew 24:42 is exactly the same word (γρηγορειτε) as in Didache XVI:1a above. In the Didache it warns for peril to life, and in Matthew it immediately follows verses 40 and 41 in which one out of two is killed and the other one survives. ‘Be vigilant therefore’ at the beginning of Matthew 24:42 can easily be read as the conclusion of the preceding two verses. With these similarities in mind the first verse of Didache XVI can be read as a homogenous war sentence. ‘To gird’ and ‘to ungird’ are synonyms for ‘to arm’ and ‘to disarm’ (see 1 Kings 20:11 and Isaiah 45:1). Armed men combined with burning lamps gives the impression of watchkeeping. Both Didache and Matthew speak of the ‘day of the Lord’, the pivotal turning-point of the era that would bring the intensely hoped-for victory of the Jews over the Romans, but that turned out to be the day of their disastrous defeat.