The apocalyptic XVIth chapter of the Didache – Part three 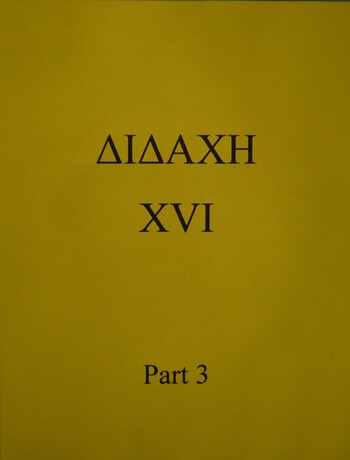 Traditionally the first part of Mt 24:12 is translated as ‘And because lawlessness is multiplied’. I believe an identical translation as Didache XVI:4 is justified because αυξανω and πληθυνω are synonyms. For the translation of the second part of this sentence, see part 2 of this contribution.

It is not difficult to discover Titus in the man of lawlessness of 2 Thessalonians 2:3-4. Of course there is no parallel for this point of view in Josephus. However, one can easily imagine why, based on Josephus’s description of Titus’s deeds, the early Christians called him an immoral, criminal man.

The deceiver of the world as the son of a deity

‘Deceiver of the world’ is the translation of the Greek κοσμοπλανης. As κοσμος is a widely used pseudonym for the Roman empire (1) in the New Testament, a deceiving Roman is meant here. This deceiver is the son of a deity, not of the Jewish God of course. As Roman emperors were divinized, Titus was the son of divus augustus Vespasianus. The destroying activity of father and son is depicted throughout Josephus’s War (and Life). The beasts in Revelation are also Roman emperors, and in chapter 17:11 the ‘eighth which belongs to the seven(th)’ describes the father/son relationship of Vespasian and Titus, the son bringing about destruction. In 2 Thessalonians 2:3 the lawless one who brings destruction (perdition) is not accidently ‘son of’, he is (at least in the eyes of the Jews) the most infamous ‘son of’ of that era.
The son of perdition is also staged in the Tiburtine Sibyl: “And he who was hung to the cross will wage war upon the son of perdition …”

(Didache) Earth is the translation of the Greek γη, which does not always mean the earth in general, but which is also used in a territorial sense, for example to denote the land of Israel, and in my opinion this is also the case here (see BDAG p. 196). So this verse tells in a veiled way that the Jewish homeland falls in the hands of Titus.

(New Testament) The ‘desolating sacrilege’. In the eyes of the Jews the Romans committed a lot of enormities when capturing the Temple Mount: the burning of the Temple itself, the massive slaughter of defenders, citizens and priests, the erection of the divinized standards of the legions in front of the Temple (some of which might have beared the image of Vespasian!), Titus’s acclamation as imperator, his entrance into the forbidden Holy of Holies, and (according to Babylonian Talmud Tractacte Gittin 56b) his cutting of the veil of the Temple and his intercourse with a prostitute on a Bible scroll. If the ἑστoς of verse 15 really means ‘standing’ in the sense of erection, then most likely the sacred standards are the best candidates for the βδέλυγμα τῆς ἐρημώσεως.

I believe that the Greek word θλιψις, which I translate as ‘catastrophe’ but which is traditionally translated quite flat as ‘tribulation’, is a code word for the destruction of the Temple and the city of Jerusalem in apocalyptic writings (Synoptic Apocalypse and Revelation). Perhaps we should write the ‘great catastrophe’ code word of Mt 24:21 and Revelation 7:14 with capitals to indicate the exceptionality of the events they describe: the Great Catastrophe.