The apocalyptic XVIth chapter of the Didache – Part four 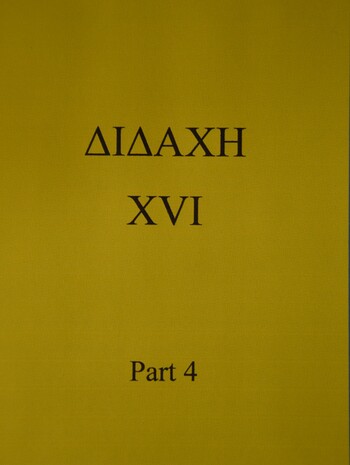 Then shall the creation of mankind come to the fiery trial and many shall be offended and be lost, but they who endure in their faith shall be saved by the curse itself.

(Didache) ‘Then shall the creation of mankind come to the fiery trial’ sounds quite enigmatic. But the Greek κτισις has the meaning of not only ‘creation’ but also ‘foundation’, ‘authority system’, and combined with των ανθρωπων it could mean something akin to ‘the authoritative (or leading) part of mankind’. It is interesting to compare with 1 Enoch 20:5 “Michael, one of the holy angels, namely the one put in charge of the best part of humankind, in charge of the nation.”, and also with Daniel 12:1 “At that time shall arise Michael, the great prince who has charge of your people.” Enoch as well as Daniel refer to the Jewish people. Κτισις των ανθρωπων might be seen as hinting at the Jewish people.

(Josephus) In War V:469 and VI:178 Josephus mentions the use of a combination of wood, pitch and bitumen to set a Roman ramp and the western portico of the Temple compound on fire, respectively. Pitch and bitumen produce a thick black smoke when burning.

(New Testament) In its disguised description of the then events the Synoptic Apocalypse does not mention the fire but the enormous column of black smoke shrouding Jerusalem and its neighborhood while the Temple was burning. ‘Immediately after the catastrophe’ points to the catastrophe as the cause of the darkening.

Many die, some are saved

“By the curse itself” of Didache XVI:5 is quite enigmatic. A great deal has been written about this fragment. Its discussion is beyond the scope of this article. I will return to this phrase in part 9 of this series.