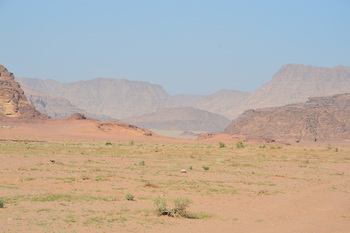 In the Nestle-Aland translation these verses go as follows: (24) “When the unclean spirit has gone out of a man, he passes through waterless places seeking rest; and finding none he says, ‘I will return to my house from which I came.’ (25) And when he comes he finds it swept and put in order. (26) Then he goes and brings seven other spirits more evil than himself, and they enter and dwell there; and the last state of that man becomes worse than the first.”

Traditionally ἐξέλθῃ ἀπὸ τοῦ ἀνθρώπου (exelthè apo tou anthrōpou) of verse 24 is translated ‘has gone out of a man’, but with the use of the determinate article τοῦ not an undefined man is meant, but a specific one: the unclean spirit has gone out of the man. The Greek ἀκάθαρθος (akathartos) is usually translated as ‘unclean’, but the connotation is moral. An adequate translation could be ‘vile’ or ‘immoral’.
In my blogpost on Galatians 1:1-12 I suggested that there the singular ἄνθρωπος (anthrōpos) as well as the plural ἄνθρωποi (anthrōpoi) are encrypted references to the Roman emperor(s).
When we also consider that

this contemptible man could be a Roman emperor.

Finding no rest in the hereafter, this man returns to his palace. This points in the direction of the myth of Nero’s return. At his return Nero finds the court better governed than under his rule. The seven other evildoers he brings together could be seven emperors. That these emperors are even more evil than Nero himself is significant. In all probability Vespasian and Titus, who were responsible for the defeat of the Jews and the destruction of Jerusalem, are included in this list of criminals. A possible list, excluding the first three emperors of the four emperor year 69 CE, could be Augustus, Tiberius, Caligula and Claudius preceding Nero, and Vespasian, Titus and Domitian succeeding him, although the wrongdoings of the four Julio-Claudian emperors were not conspicuous in the eyes of the early Christians. An alternative list could start with the utterly evil Flavians (Vespasian, Titus, Domitian) and continue with Nerva, Trajan, Hadrian and Antoninus Pius. The latter four were also evil because none of them allowed the Jews to rebuild their temple, a major longing of the Jews in the period after its destruction. Moreover, the emperor Hadrian was responsible for the suppression of the Bar Kochba revolt and the transformation of Jerusalem into the gentile city of Aelia Capitolina. Nevertheless, the former option is more in keeping with the traditional dating of the gospel of Luke than the latter.

The Nero redivivus legend says that Nero fled to Parthia, which is located at the other side of the Syrian desert from the Palestinian viewpoint. This could justify the translation of the τόποι (topoi) of verse 24 as regions and therefore the translation of the phrase as ‘passing through waterless regions’ instead of ‘passing through waterless places’. That the reign of ‘that man’ in verse 26 is divided into two phases also points in the direction of the myth of Nero’s return.

With the suggestions above Luke 11:24 can be translated more specifically as follows (my underlining of words with a different translation emphasis): When the vile spirit has gone out of the man, he passes through waterless regions seeking rest; and finding none he says, ‘I will return to my palace from which I came.’