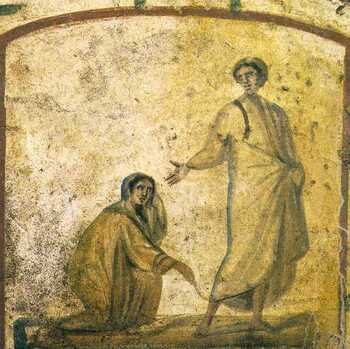 In Antiquity, nations and peoples were frequently symbolized by women. Proof of this custom can be found in the images on coins and elsewhere. There are, for example, the well-known Roman ‘Iudea capta’ (Judea captured) coins minted by Vespasian from 71 CE onwards which show a subjugated and mourning woman sitting under a palm tree, symbolizing conquered Judea. Apart from the fragment under consideration here, a woman as symbol of the Jewish nation is mentioned in Luke 1:48a: ‘For He [God] has regarded the low estate of His handmaiden.’ This verse is part of Mary’s speech which, together with Zachariah’s, expresses Luke’s messianistic liberation ideology. Because in Mark 5:25-34 a woman plays the principal role, a political interpretation of this fragment might be possible. I have elaborated it as follows.

What elements do we discern in the first verses of this fragment? A: a haemorrhage; B: a period of 12 years; C: suffering under many physicians; D: devolution to poverty; E: a downward spiral.

Ad A: The fragment describes a ‘flow of blood’ without further detail. The haemorrhage image may be a symbol of suffering or maltreatment. No concrete element(s) point(s) to a somatic problem, for example a gynaecological bleeding.

Ad B: In a literal reading nothing can be said about a 12-year period (except that it is a long one). In a political reading the most obvious 12-year period in that era is the duration of Nero’s rule from the start until the beginning of the Jewish revolt (54-66 CE).

Ad C: A literal reading of ‘suffering under many physicians’ is quite bizarre. In a society without advanced health care many health problems may have remained untreated, but even then suffering from the treatment of different physicians is not to be expected. Why would the woman resort to medical overconsumption (which moreover seems to be a modern phenomenon) while the physicians are all making her condition worse? From a political reading, considered against the backdrop of the years 54-66 CE, it is clear who these bad physicians are. They are the incompetent, greedy and harsh procurators whom Nero sent to Palestine in the years before the great revolt. Josephus describes their outrage in detail in his Jewish War.

Ad D: From a literal reading, the devolution to poverty is a comprehensible detail because the doctor’s bills exceed the financial capacity of the patient. But this element is also strong given a political interpretation. The Jewish people has suffered decades of harsh Roman taxes, pushing a lot of people into poverty, and the greed of the Neronian procurators even increased the financial and social problems of broad segments of society.

Ad E: The downward political and social spiral in Palestine in the decades before the rebellion has been clearly depicted by Josephus. Rebellious activity rose together with social disintegration and widespread despair, culminating in the great rebellion of 66 CE.

My political reading of this fragment yields the following unveiled description of the political situation in Palestine that caused the great revolt:

‘The Jewish people has suffered for 12 years under the Roman emperor Nero. While one would expect that governors take good care of their subjects, our people has suffered a lot from the successive incompetent and greedy Roman procurators Nero sent to us. Our country has bled dry, poverty has been continuously increasing over the years. We all saw the rapid and steep decline of our country.’

As I did not read all the literature on this fragment, I may be repeating an interpretation that already exists . If so, I would be grateful to receive references to existing literature.