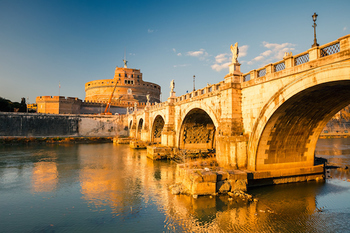 Revelation 16:12: The sixth angel poured his bowl on the great river Euphrates, and its water was dried up, to prepare the way for the kings from the east.

Recently I read Myth and History in the Book of Revelation (1979) by John M. Court. On p. 74, I came across this passage that deals with the river Euphrates: Significantly, part of this theme of the sixth trumpet vision is resumed in the description of the outpouring of the sixth bowl in the sequence of ‘last plagues’; the area affected by this sixth plague is ‘the great river Euphrates’, with the result that the water is dried up, ‘to prepare the way for the kings from the east’ (16:12). Again, the theme of invasion from the East, with its local reference to the natural frontier of the Euphrates, is applied to a cosmic setting, this time the mustering for Armageddon.

Court takes the Euphrates river literally, as he makes it the starting point of his reasoning on an invasion from beyond this natural frontier to the east of the Roman empire. In Fallen is Babylon (1998) Frederick J. Murphy also takes ‘Euphrates’ literally. But I would argue that if Babylon is the code name for Rome, the Euphrates river that irrigated Babylon might be the code name for the Tiber river that flows through Rome.

A quick search on the internet led to the discovery of the book A Paraphrase and Annotations upon all the Books of the New Testament (1845), by H. Hammond (thanks to Google books). On p. 594 his note on ‘Euphrates’ goes as follows:

That it is agreeable to the calling of Rome Babylon (…) to set Euphrates, the river that belongs to Babylon, to signify Tiber, that belongs to Rome, hath been formerly shewed (…). And that it so signifies here, there is little doubt. From hence it follows, that the drying up of Euphrates, being an allusion to the history of Cyrus, prophetically set down, Jer. l. 38, and drought is upon her waters, and they shall be dried up, and ch. li., where is mention of the drying up her sea, and making her springs dry, ver. 36, it must in reason be interpreted thereby. There, in the taking of Babylon, Cyrus turned away the river Euphrates, and entered the city through the channel thereof. And so the drying of the river being preparative to the taking of the city, and the making that weak and accessible which otherwise was impregnable, this phase of drying up the water of Euphrates is thought commodious to be made use of to express the weakening of the strength of Rome, and making it conquerable, or, as it here follows, that the ways ———— might be prepared. To prepare a way, we know is to remove difficulties and obstructions, to level and plain a passage, and that in the prophets expressed by exalting valleys, and bringing hills low, and plaining the rough places. And when rivers and waters are in the way, then the drying them up, is preparing the way, making them passable.

I believe this explanation is perfectly plausible. One more element should be added though. In the verse discussed, a way is prepared for the kings of the east, in plural. Playing with numbers is one of the favourite techniques of the author of Revelation to disguise his intentions, and in my opinion he makes use of this technique here also. The king of the east (singular) is another name for the messiah, the opponent of the Roman emperor in the west.

The 'Tiber' option yields a strong messianic picture: In 539 BCE Cyrus the Great, the only foreign king called 'anointed' in the Old Testament, conquered Babylon by draining the Euphrates and marching into the city across the dry riverbed. The writer of Revelation hopes that in the near future the same will happen to Rome. An angel (a kind of powerful advance guard) will cause the Tiber to dry up, creating a huge natural breach in the city walls. On this broad avenue the messianic army will march into exposed Rome and conquer it. After this final victory over the capital of the hostile Roman empire, the anointed Jewish/Essene messiah will be installed, and world dominion will pass from the Romans to the Jews. From now on the messiah will eternally reign the whole inhabited world ('and he shall reign for ever and ever' Revelation 11:15).